Some Tips
How much technical knowledge do you need for...
How much do we need for the world...
How did we decide to go to the...
Home Southern Africa Riding motorcycle with Elephants in Botswana
Southern Africa

Riding motorcycle with Elephants in Botswana 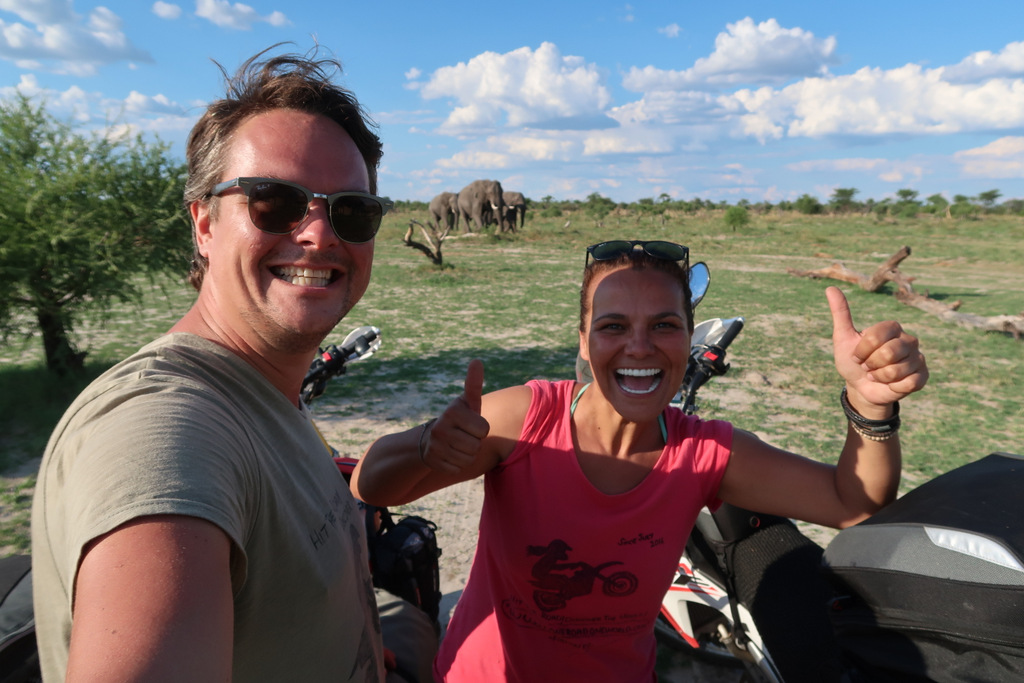 Botswana was on our list because of elephants normally all national park are forbidden to enter with motorcycle. So where we can be to see wild life when we ride: Botswana! To be honest, most of the roads are a little boring to ride because nothing around to see on the road. Also, they don’t have gas station a lot to fill tanks. We can go 250 km with a tank and between two gas stations the distance is 300 km. 🙂

We passed Botswana from Pioneer gate, which was almost empty but took an hour. From the border to Orapa is around 600 km. We knew that we couldn’t make it in a day. Therefore, we started to look a spot for bush camp just before sunset but we didn’t find really something to stay. We saw a sign was writing, “Rock city camping”. Why not! We were so tired after the border crossing, riding 300 km and also it is extremely hot. They said they have a shower, toilet, light…etc and it looked like nice from outside! 10 USD pppn. If you take a water bottle and make some hole with needle, I suppose you can have more water to come out of the shower. Toilets without a seat and no electricity. It was almost dark and no options more. We stayed…. 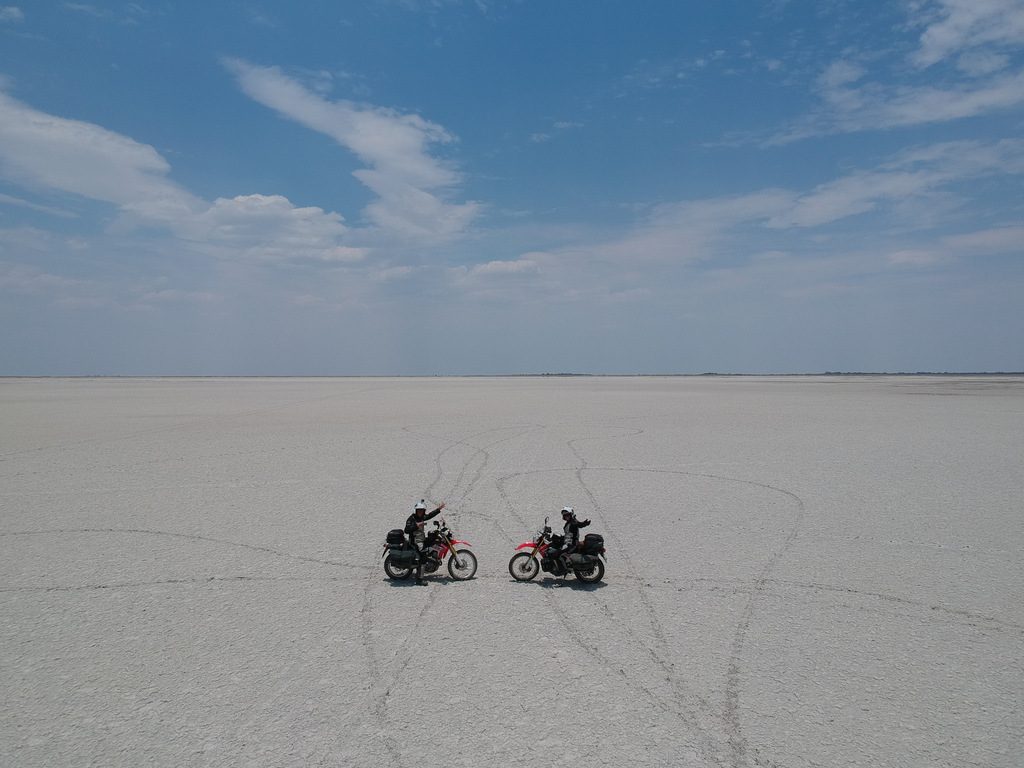 Next day, we ride to Orapa and stayed at a nice camping site. The place was so close to Kubu island where you can go to the saltpan. It was really nice feeling to ride motorcycle on the saltpan because nobody around and all belong to us. We didn’t go to end of the road because it was so hot and the road was soft sand most of the time. We enjoyed there a couple of km and than we turn back to the camping. By the way, you can go to free safari there with your own car. If you stay around just ask for Orapa national park. By the way, we stayed in Tuuthebe Lodge&Camping, was a nice place, we really like it. 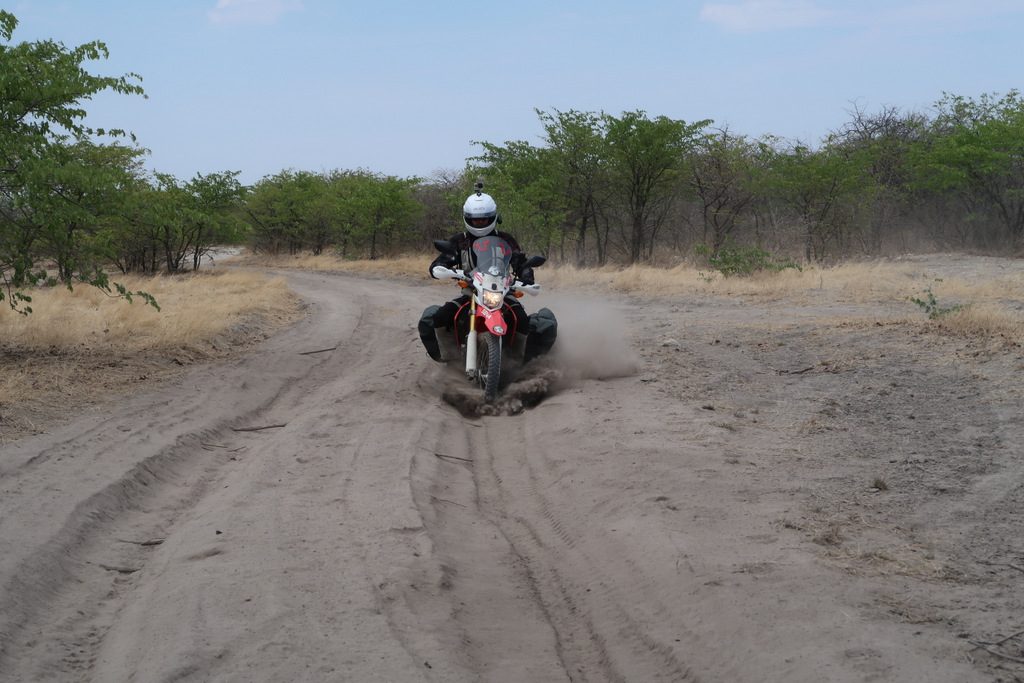 Our next stop was Maun, which is at the Okavanga Delta. It was just 360 km but no way to ride in a day. When we were there we didn’t have chance to ride motorcycles after 12 pm because of the hot. We could make an omelet on the tar road without fire. 🙂 So, on the road we stayed at one of the camping sites. I suppose that we never understand how much expensive it can be to set up our tent in a camping site in Botswana. Especially after the South African campsites and prices, Botswana needs to work about it. Anyway, they know you don’t have a lot of option therefore they can put a price, right? 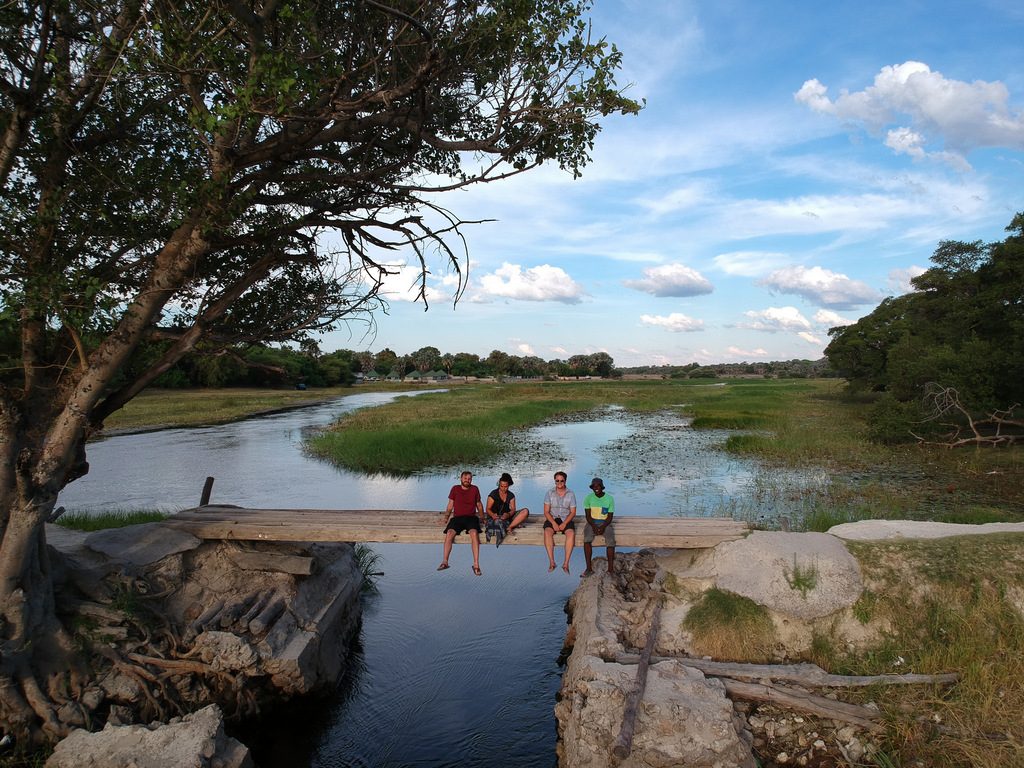 We stayed in Maun 3 days. We met Patrick who came from USA. He is on the world trip by motorcycle too and he wants to do the Western cost of Africa where we ride already. So, we spent a lot of good time with him.

Also, we watched hippos there and enjoy with the Delta views. They have a lot of alternative to boat tour, daily, two days…etc., also they have some island in delta which you can visit. Of course, prices are so different. You need to ask there about options to decide. We stayed “Old bridge backpacker” place, which was a little cheap and atmosphere was good. 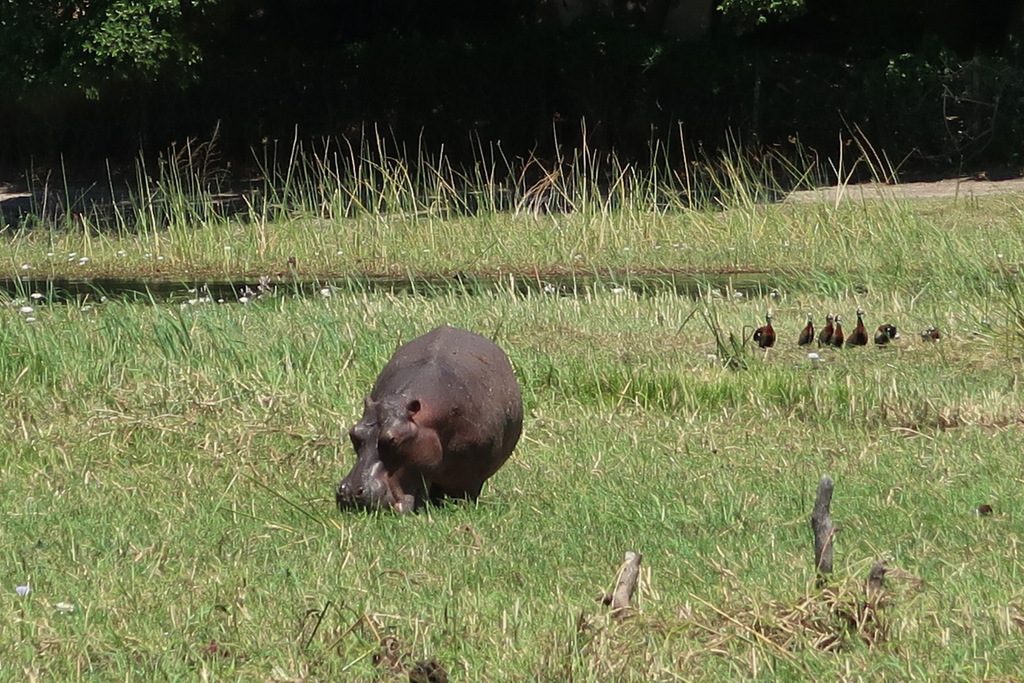 It was time to hit the road to Nata and than Kasane where we can ride motorcycle with Elephants. Before we go to Nata we stayed one night in Gweta. We decided to wake up early and ride motorcycle until noon in Botswana or we can burn our self with sun.

Next day, when we were going to Nata we found a gas station. We were happy about it, because we didn’t need to use our rotapax. Of course, it was just a dream. We saw a line in the petrol station. They said that they were waiting for petrol more than an hour. So, we opened our rotapax and fill our tanks in the gas station. 🙂 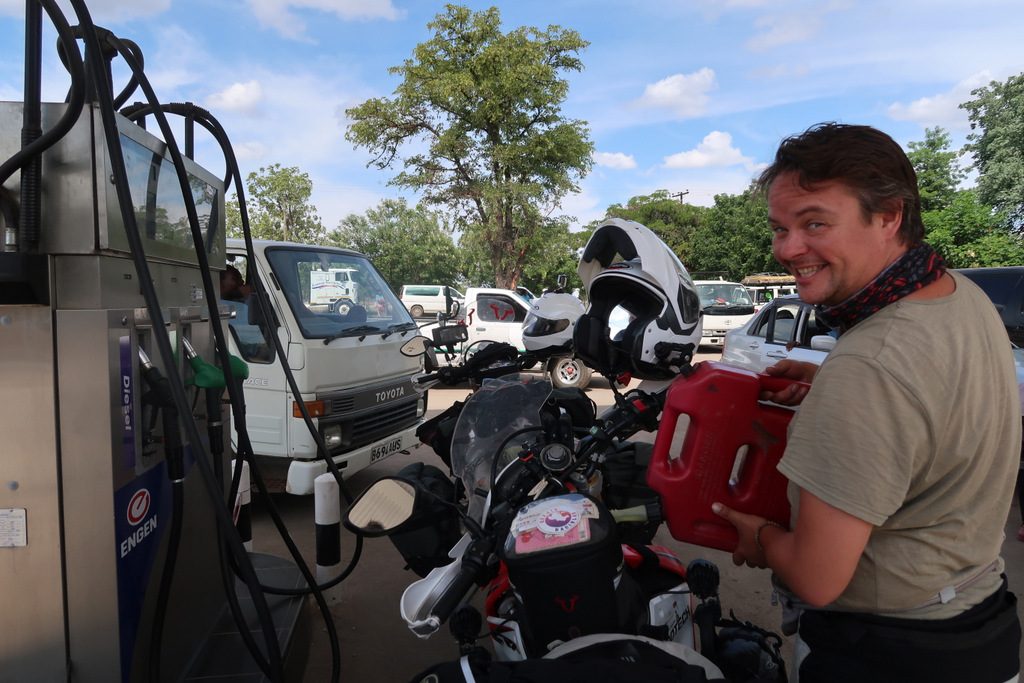 We could get petrol in Nata. We were riding on the road to Kasane from Nata, we saw our first Elephant on the road. And than again, again, again… We decided to stay somewhere on the road and get close them more. We went to “Elephant Sands”. Their road had full off elephants. We scared a little in the beginning to ride but we saw Elephants didn’t butter us that much or the engine sound which was great for us. 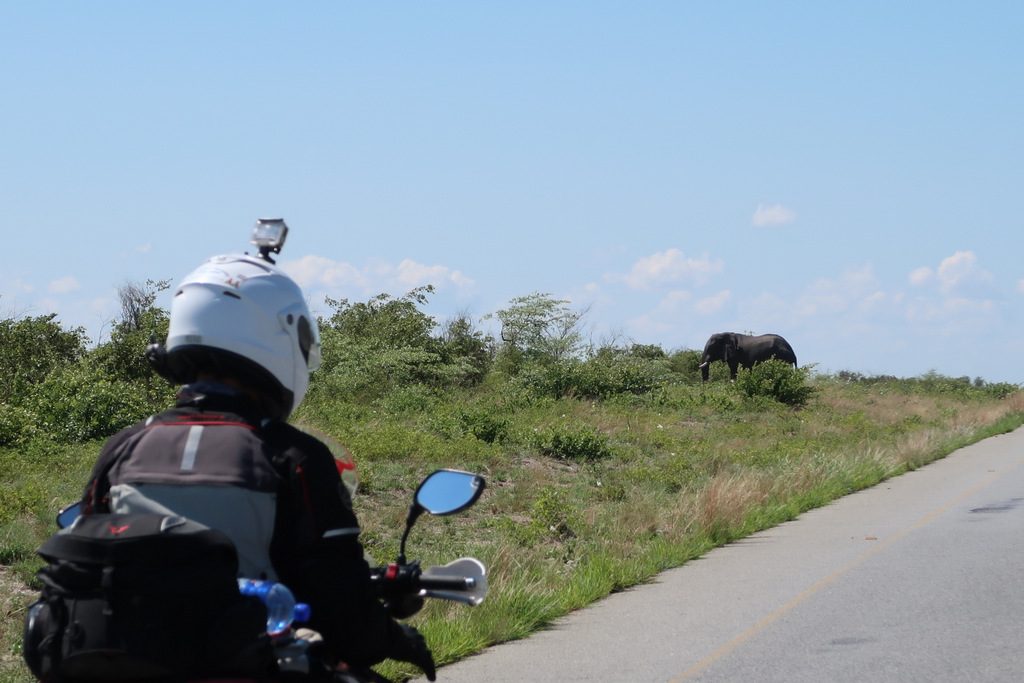 We stayed in Elephant Sands two days and saw more than 200 elephants. It was so crazy experience because they were just passing next to our tent or motorcycles. They were looking us and than keep continue.

And then we went to Kasane, which was our last stop. It was our last ride in Botswana and a group of Elephants showed up on the road. We never ever forget this experience. 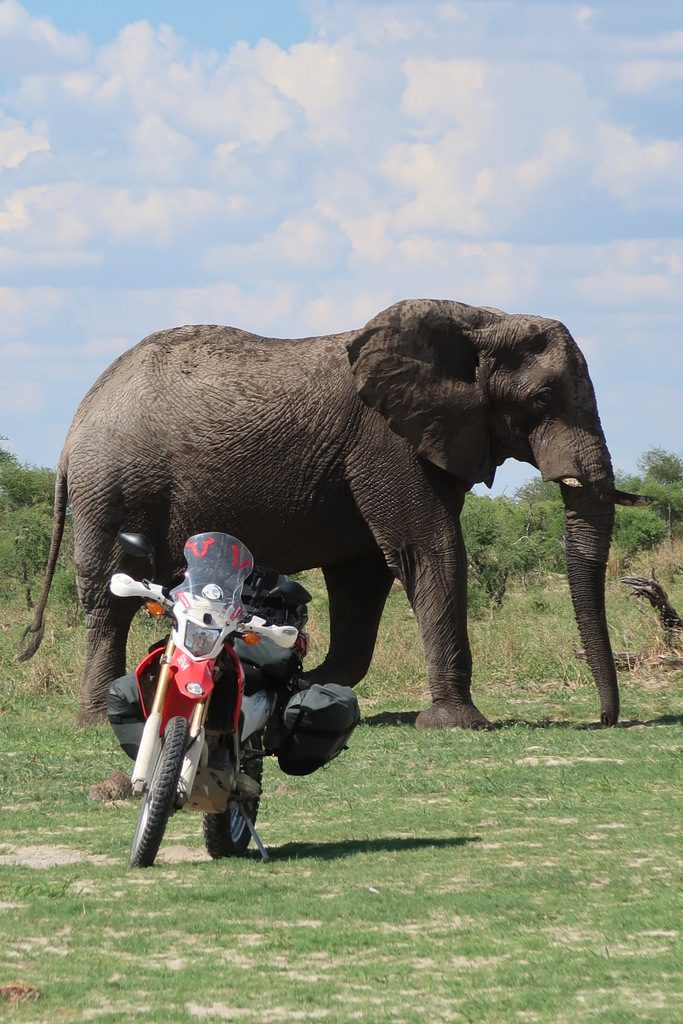 In Kasane, We didn’t want to go to a river tour because we were staying next to the river and we already see wild life a lot next to us. So, we didn’t spent money for it…. 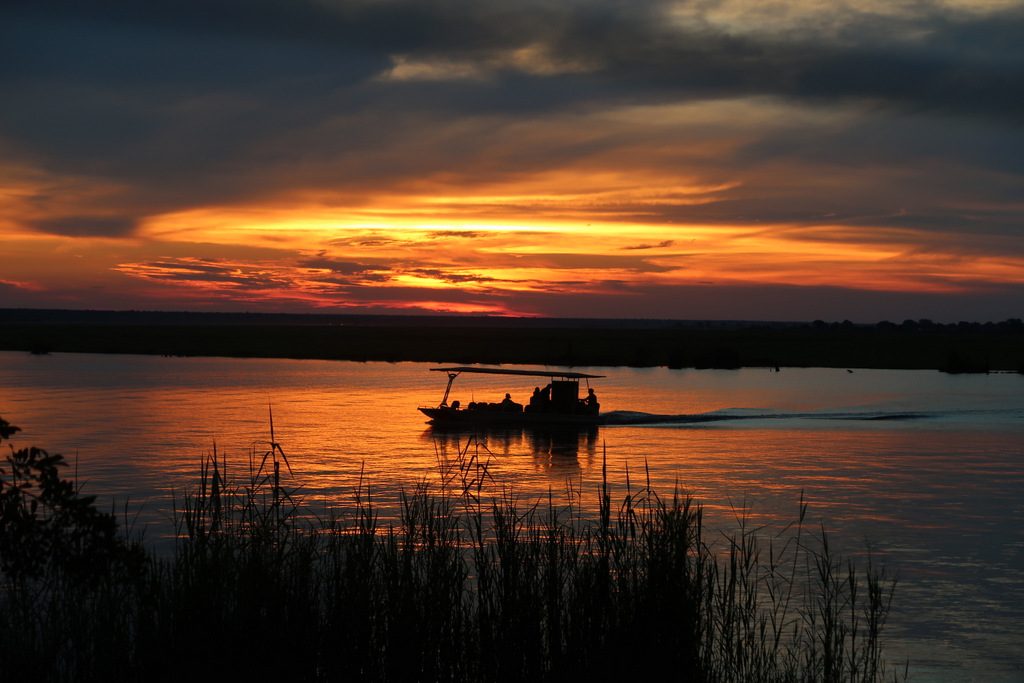 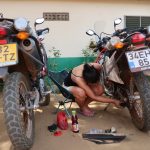 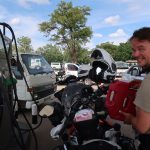 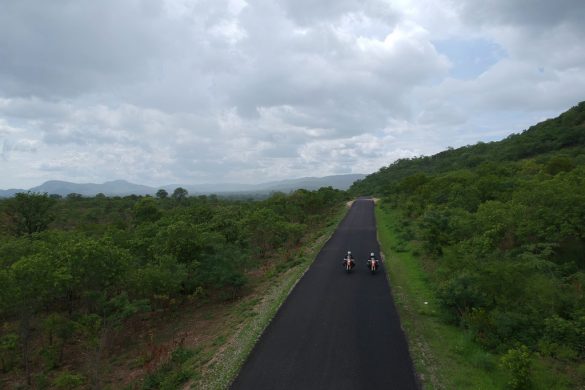 Zimbabwe is such a nice country 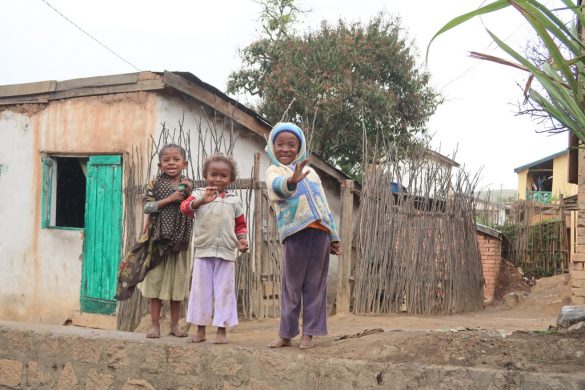 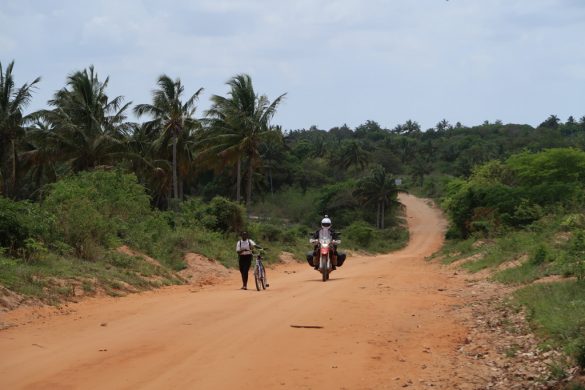 We couldn’t find that much things in Mozambique 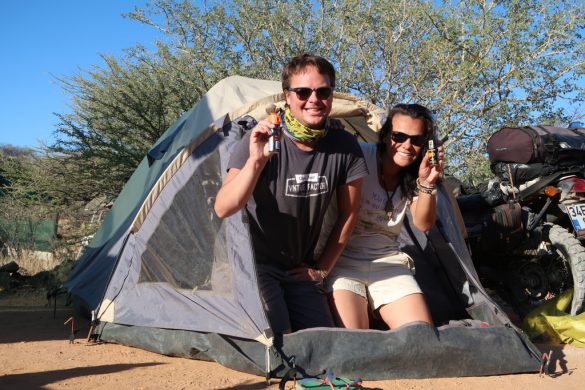