Some Tips
How much technical knowledge do you need for...
How much do we need for the world...
How did we decide to go to the...
Home Western Africa Western Sahara
Western Africa 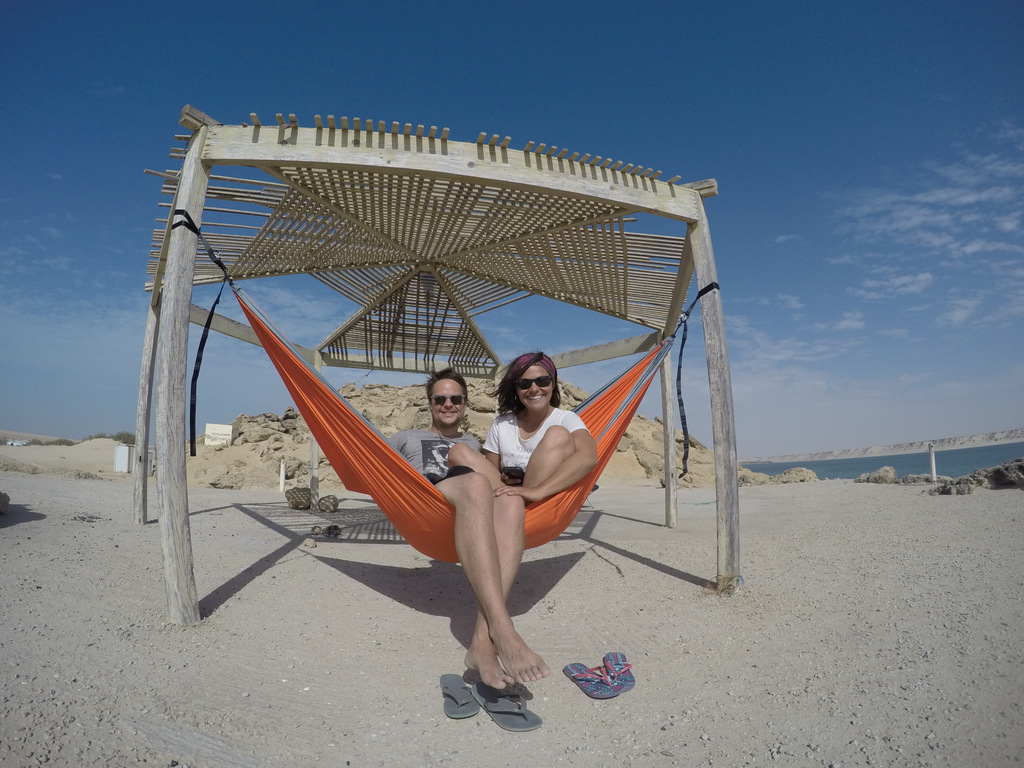 No border crossing, No visa. Western Sahara border just 40 km far from Tarafa on the coast road. If you follow the main road you are on the good asphalt until Mauritania border. Unfortunately, It is a little boring road because nothing to see that much. Sometimes, possible to see wild camels, some sand hills and salt… Only, I can tell that Dakhla road was pretty nice. We had really nice time for camping and interesting experience. I would like to road about them.

If you like you can watch it before start to read about Western Sahara:

***We wanted to stay in Tarafaya before sunset. We saw one camping area on the road, they wanted 10 USD for nothing. Inside were fully little sand hills. It wasn’t easy to open tent, shower were bad, no Wi-Fi. Also, I am not sure electricity was working well. So, it was too much to pay. We decided to leave from main road and ride 40-50 km. on the coastline and look for wild camping. We saw everywhere has a fisherman houses and no way to find a place nobody can see you. 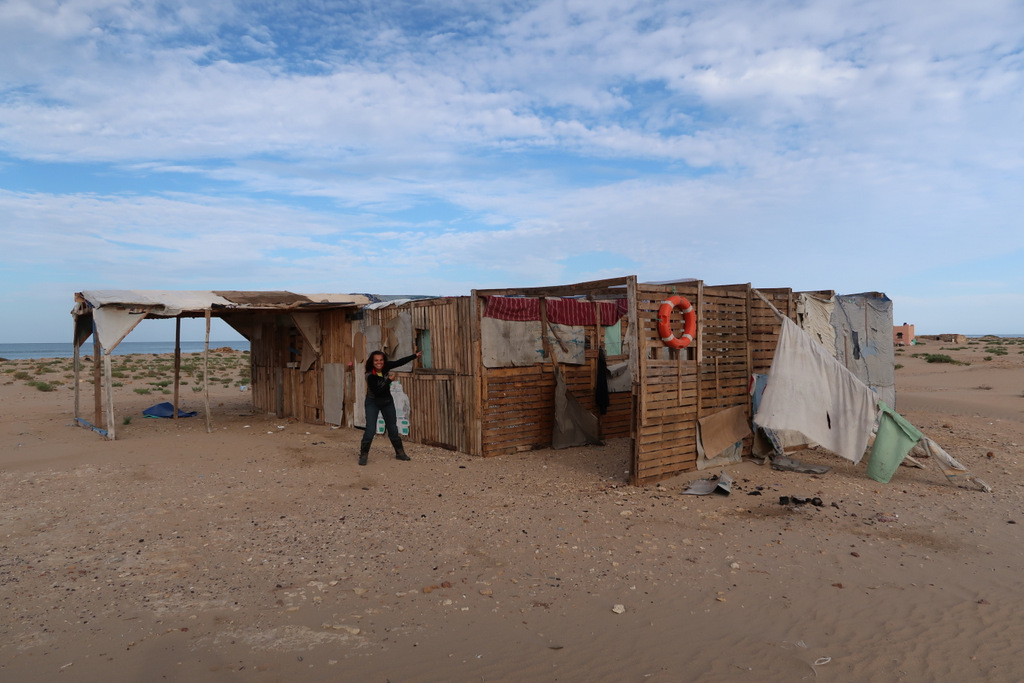 We ride to the beach and saw some families were living. We asked them to open tent next to the their house for a night. They said ok. We opened to the tent and got ready to cook before dark. A soldier came and said that we can’t camp here. We must turn back Tarafaya and stay in a camping area. Almost dark! It could take time to collect everything L We told him to allow us to stay one night, we don’t want to ride in the dark. He was telling us but we couldn’t understand with our French. Only we understood that he was going to call his commander and ask. He came back and said that no camping here but we would like to help us. But how? He took our passport and said to Ferry that Ferry needs to walk with him. They got disappear in the dark. I didn’t have any idea what I need to do. After 15 minutes later a car came next to me and started to speak Spanish directly which is great I can speak. Somebody told him that we want to stay here. I explained to him why we wanted to stay here. He said no problem wait here and he also went where Ferry went. 30 minutes later Ferry came finally… We were tourist there and they don’t want to something happing us. Who came with a car next house, which we open the tent, called him. And he came to talk the soldier for gave a fisherman house key which is empty next to the soldier place. So, we collect everything and went to the fisherman house. We put motorcycles next to the soldiers. Soldiers were really so helpful. They carried us clean water to drink also for shower. They wanted to give mattress and blanket. We were surprise. When they told us ‘Tourist cant camping here’ we really scare where we can go in the dark. In the morning, the soldier invited us their place for breakfast including the lovely Moroccan tea, he is big fan of that. When we hit the road again he gave us nice Moroccan olives oil to eat on the road.

***Where we stayed it was so closed to capital city, Laayoune, of Western Sahara. We just passed and went to Boujdour. It is nice city to see Western Sahara life. After Morrocco I can say that a lot of thing is different especially for women. When you go there you can see what I mean. 🙂 We stayed in Boujdour 2 nights after that we followed to our road. 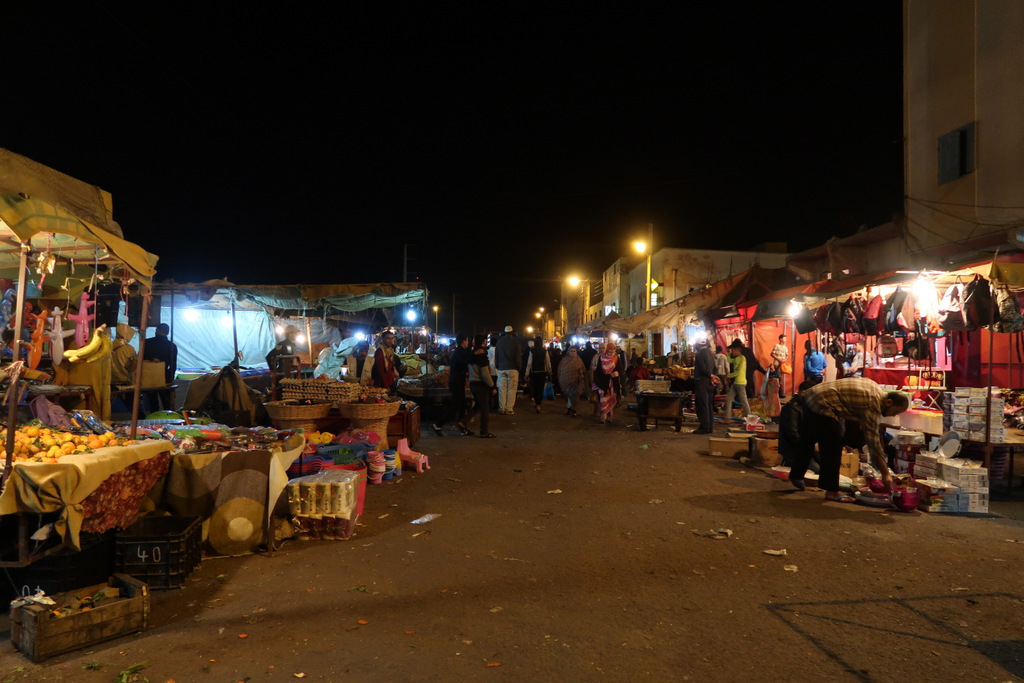 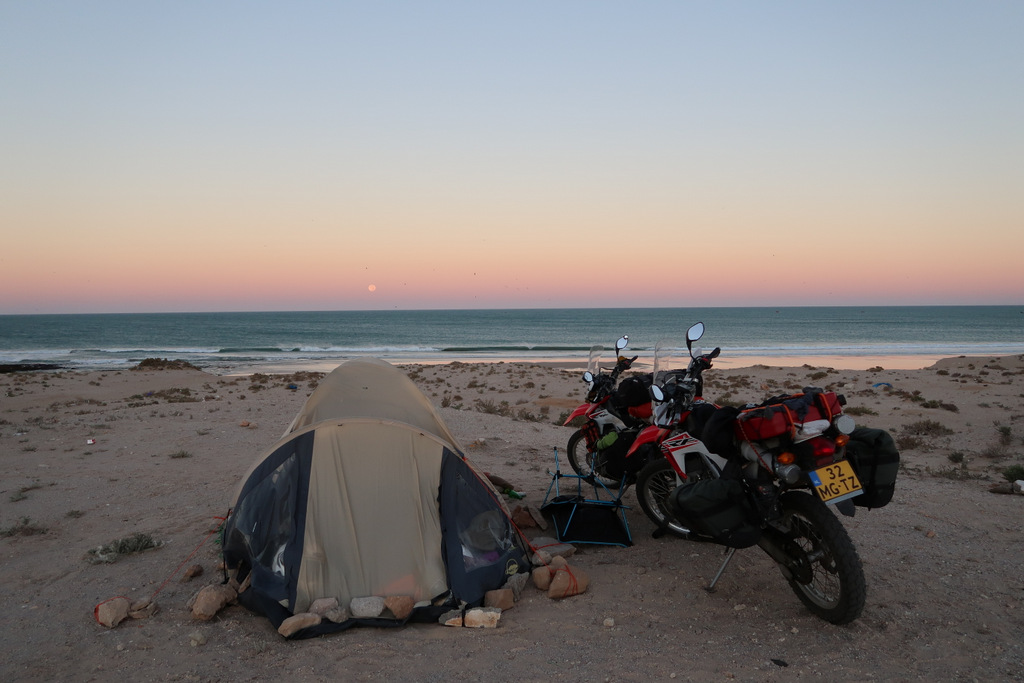 It is really amazing spot. Sunset, sunrise, moon, view…etc.You can eat fresh fish, which you can buy from fisherman. We didn’t buy eat because they gave us a lot when we were trying to take photo from them. They came to us said that they are for us.The place is 5 km far from the main road. Therefore, you can easily go to a market to buy bread and water. Also some basic food.

***Our next stop was Dakhla. First we went to the camping place. But we stayed one night. You need to pay for shower extra, no Wi-Fi and electricity comes in the night only. Why do I need pay a camping side just for open a tent if I am not in a dangerous place? 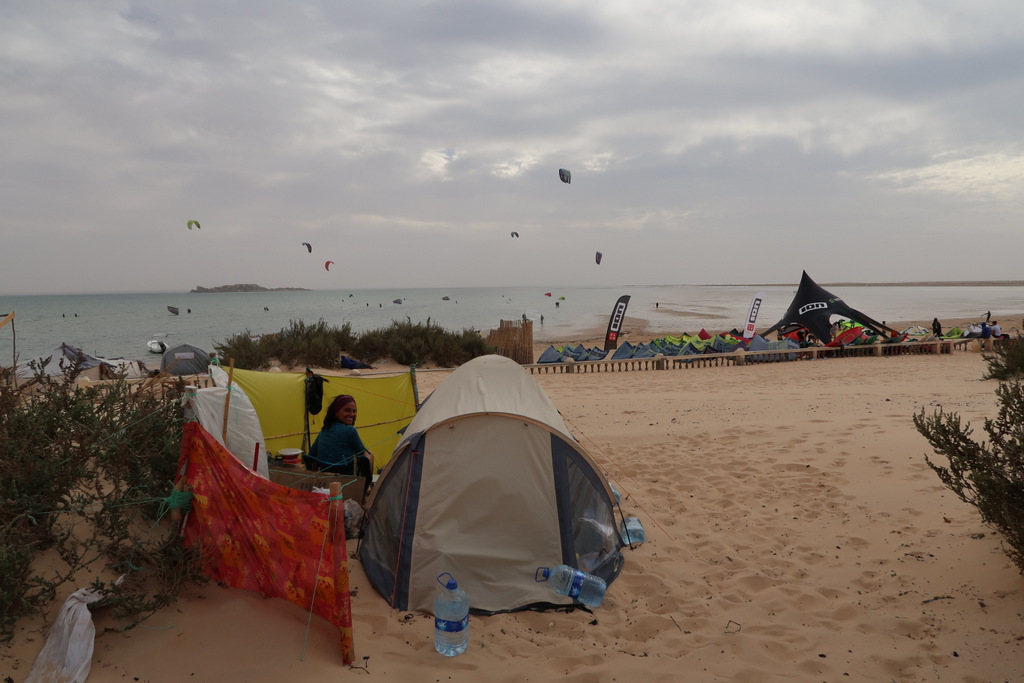 30 km. before Dakhla it has sign which writes Camper side and free. Go there to camp a couple of days. Before leave to camping side we went to shopping. I was sitting Ferry’s back and we had a little accident: Maybe the taxi suddenly stopped middle of the road to take customer but it was our fault because we crashed the taxi from back. Anyway, they were really friendly. They wanted to be sure first we are ok after that motorcycle. The driver asked we need a police to the report because he wants to go. I was surprise because we crashed him and he had a little damage on his taxi but he was thinking about us.

Ferry said his chest was hurting a little. So we went to the camper side to camp. It was good idea to wait 4-5 days to Ferry ok or not. If something happened we could go to a big hospital in Dakhla. He felt better in a week but we stayed the camper side 3 weeks. J We learned Mauritania visa price, which was 120 Euro and would be 55 Euro, would have changed in New Year. We were staying free next to the beach and we had water to shower or wash stuff. Also, Tito was there, who came from Luxemburg and has a lot of solar on his car to help us, to free electricity. It was good opportunity for us to stay longer a place in the tent to get use to it more and more tent life. Also, learn how we can work together with less trouble. We have learned really a lot there. 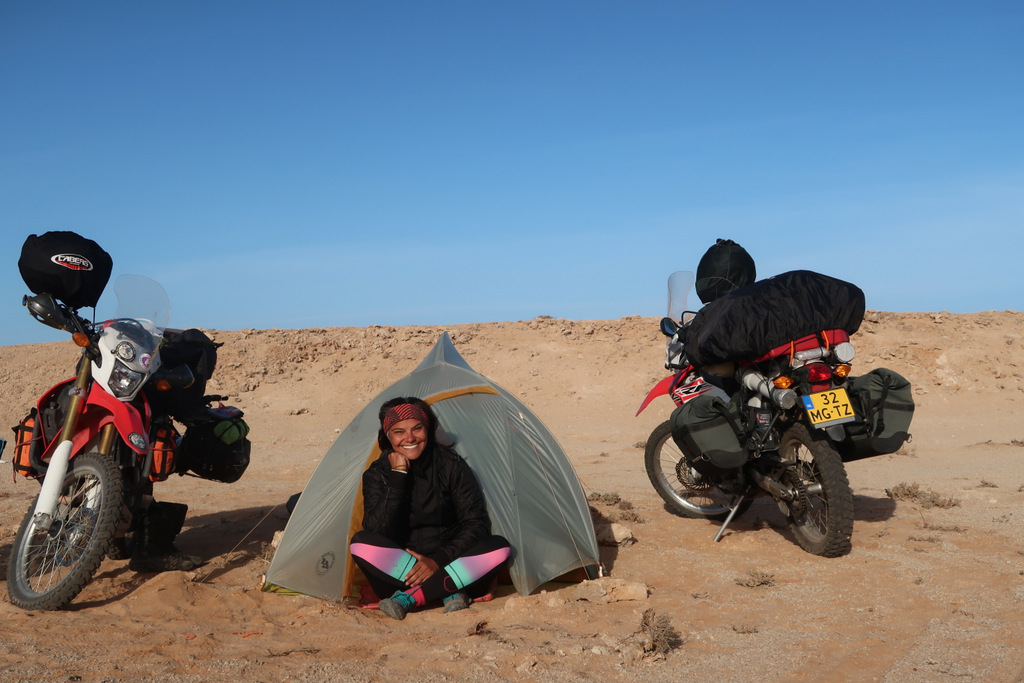 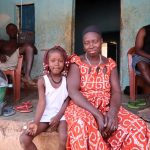 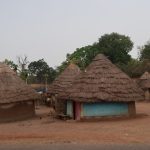 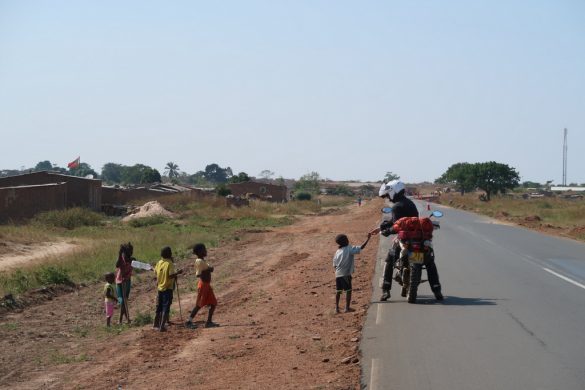 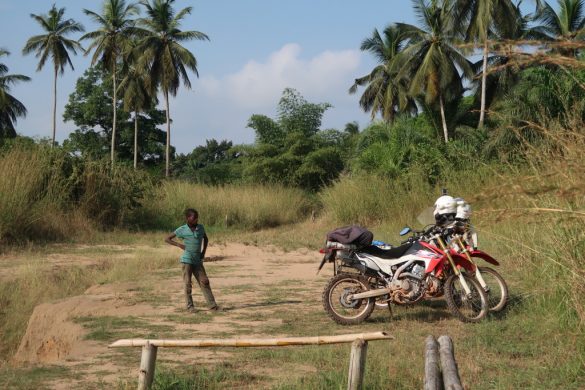 Gabon is another world! 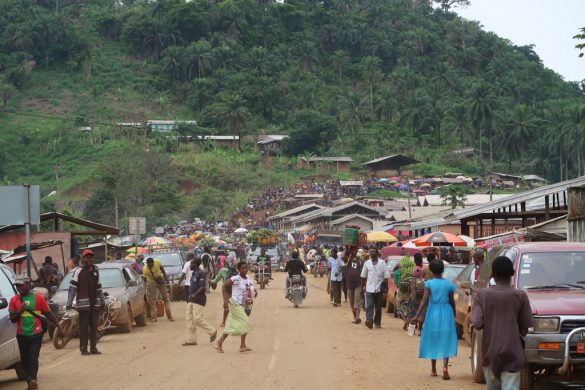